Ergo… we wanted to show our Movember support for mustaches, men, and man parts!!

What do mustaches have to do with prostates, you ask? According to the Movember website:

During November each year, Movember is responsible for the sprouting of moustaches on thousands of men’s faces, in the US and around the world. With their Mo’s, these men raise vital funds and awareness for men’s health, specifically prostate cancer and other cancers that affect men.

Hopefully the cute finger staches la has donated to the cause raise much awareness and many donations!!

Click here to see our previous contributions to the movement. Preview: la looks a little dirty and I look like a weird old man.

xo to all our favorite men out there… may your prostates remain healthy and vital!
li

A Spoonful of Music Makes the Work Day Go Down!

In the most delightful way!

When walking down to the basketball court, you could hear her haunting voice floating up to the third floor stacks. She was quite ethereal, at times operatic, and reminded me of a wood nymph. And her upright bass player wasn’t too shabby either!

That’s her. And here’s her own self description:
“I am a Flower Alchemist with a minor in music.
Born in New York City, raised in Motherland Russia, spent teenage years sequestered in an Italian monastery.

Following a prophecy, arrived in the U.S. incognito and studied opera. The rest is history.

I seek to sing in a manner which would create within your chest a safe, magical, truthful place of power beyond the slow burn of stars.”

And then last night, Shane at Hum was kind enough to invite us to a Blitzen Trapper performance.

This is pretty exciting to us already, as the last time I saw them was at the Hollywood Bowl. And the time before that at Coachella. And we’re getting to see them with 50 other people in a garage. Seriously, pretty sweet. And I really really love this band.

This song we’ve tried to put in many a commercial… Maybe it’ll still happen! (please ignore my atrocious singing, my goodness, I totally didn’t consider that my voice would get recorded as well, whoops!)

And after the show, li had the awesome idea to get them to sign the set list. Which we did.

But more importantly, we had a really awesome time getting to know the band. They’re all from Oregon (except for Marty, he’s from Washington). Topics discussed included: the soft harem, attempting to sign girl’s boobs with a bic pen, Indiana Jones, the word “hapa,” alcoholism recovery and country music. 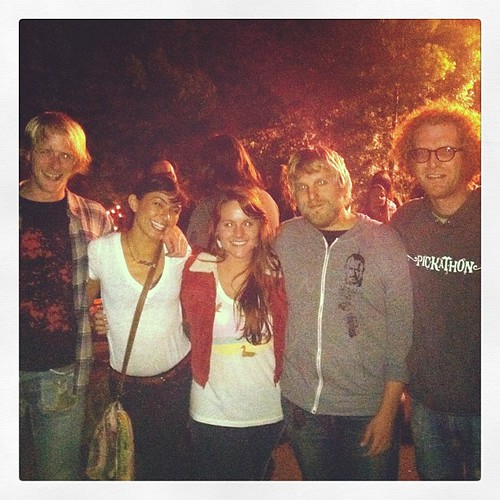 We also got lessons in air drumming.

All in all, it’s been a pretty work perky kinda week. And we’re not complaining!

Thanks Elizaveta & Thanks Blitzen Trapper!

PS Listening to their new album now, and it’s like 70’s trucker bar in the lali cube!
PPS Also, Ashley Ford came to visit and brought us some cool necklaces from Savage, their new production company! Keep bringing on the work perks! Good thing we took our bribery training class… (!!!)

Things Are Lookin’ Up!

We love this spot. And the line at the end, things are lookin’ up, is our slogan for the day!

So regular blog readers may know, li and I have not had a super lucky year in terms of selling work.

However, yesterday we had a pretty good meeting for Kraft. And while we don’t believe anything is REALLY sold until we see it on the television, things are looking good on this one.

So we’re going to celebrate by going to happy hour today!

But first, we had to take care of business. There are a lot of things we’re “supposed” to do, but as creatives, and because we’re allowed to act like children and be irresponsible, we sometimes let those things slip. It’s not that we intentionally ignored the 72 reminder emails. It’s just hard to find time for these things! So in our free hours this morning – because the meeting went well woot woot! – we decided to: do our backlog of timesheets from July, do expense reports dating back to July, complete our “combating bribery in business training” and fill our our health quotient (whatever that is and whatever it’s for, we’re still not clear!)

This was, of course, a source of amusement for both of us.

We answered “honestly” in our health quotient, which for li, meant that she got a super low score, mostly due to “stress at the workplace.”

And just now, while blogging, we had a side chat with some coworkers about their OWN health scores. Li, 36. La, 51. Brandi, 49. Eze… 23. (the average is 53. DANG! Chiat FAIL. Someone FROM Health Quotient even CALLED Eze to make a health plan for him. What is interesting about all of our scores, is that our highest risk factors are based on… STRESS. And mostly stress at the workplace.

Also worth noting that we are all at risk for colon cancer. Because of stress.

Now to combating bribery in business. Of course, bribery is no joking matter. And while li and I are the beneficiaries of some nice work perks, like a concert or two here and there, we do take bribery seriously.

However, parts of this training we found slightly amusing.

When I first started the training, I tried to skip forward too fast (whoops, I skimmed!) and “combating bribery in business” informed me that I need to spend more time on that page. I thought this was hilarious, because IT KNEW I skimmed! I no longer thought it was funny after the seventeenth time it told me the same thing.

However, my “certificate” made me super happy again. Woot woot!

So here’s to a day of busy-work completiong & good news. Things ARE looking up. Take THAT, health quotient! At least for the time being, our stress levels are going down :)